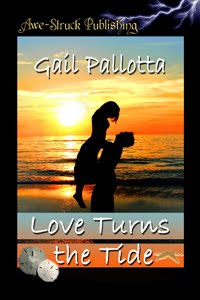 In the Wilderness by Guest Blogger Gail Pallotta,
Author of LOVE TURNS THE TIDE

In my new inspirational romance, LOVE TURNS THE TIDE, twenty-six-year-old Cammie O’Shea takes a job in Destin, Florida, and simultaneously suffers a heartbreaking split-up with her fiancé. Moving one week early to keep an appointment with an important client, Vic Deleona, she goes to his office to interview him before she even meets her new boss at The Sun Dial newspaper. When she enters, Vic has his back to her, so she pushes the door shut to make a noise. He turns and glares at her with angry green eyes. Then, he takes a call, excuses himself and leaves Cammie standing alone in the middle of the floor.
I thought of Cammie a few weeks ago, when I heard a sermon about the hungry Israelites wandering in the wilderness grumbling that at least they had had food, when they were slaves in Egypt. As soon as the minister pointed out that we too can find ourselves in a wilderness with no one but God to turn to Cammie came to mind. She leaves her family and friends she’s known for years and ends up in a place where she knows no one. Not long after she settles into her apartment in Destin she visits the shore.
When she sees the beauty of the water and miles of white sand dotted with sea oats blowing in the breeze, she stops in her tracks and thinks, “What a sight it must have been for the disciples when they saw Jesus upright on the lake. The Bible said they were frightened and thought it might be a spirit instead of Christ until he told them “…Take courage. It is I. Don’t be afraid.” Then Peter walked on the water. As long as he stayed focused on Jesus he never faltered, but when he became skeptical and turned his attention to the wind, he sank. In Matthew 14: 31, when Jesus caught him he said, ‘You of little faith, why did you doubt?’” While still staring at the sea Cammie ponders why she doubts.
Now when she needs God most with her life spinning out of control, for some reason she doesn’t understand she feels more estranged from him than she ever has. “If only he would take the weight of the failed romance, the new job, and a new home off her shoulders. She was saying her prayers and reading her Bible every day. What more could she do?” she asks herself.
Being in the wilderness is like being in a jungle with a forest too dense to let in a ray of sunshine and underbrush so thick one couldn’t walk through it even if there was a visible way out. One can stroll into it so easily, so unexpectedly. One day life’s humming along; the next, the dark curtain falls. A number of events can create a wilderness, joblessness, controversy, disagreements, illnesses, separation from loved ones, loss of loved ones. When I’m in my next one I’ll try to think of the part of the minister’s sermon when he reminded the congregation that God sent the Israelites manna in the wilderness.
The minister also claimed that the time spent in a desolate, lonely place would strengthen one’s faith. Even though I know such words can dissipate into jumbled letters that make no sense when gray clouds hover over a person day after day, I’ll cling to the thought and know that God is with me. If I keep believing and follow his lead I will find my way out.

Matthew 17:20: “…I tell you the truth, if you have faith as small as a mustard seed, you can say to this mountain ‘Move from here to there’ and it will move. Nothing will be impossible for you.”

ABOUT THE AUTHOR:
The granddaughter of a minister and niece of several English teachers, Gail inherited their interest in storytelling and her mother’s love of people. Her first writing appeared in a grammar school newspaper she and a friend put out about their classmates. Many years later she worked in Atlanta, Georgia, as an editor and copywriter. After she married while helping her husband with his business she published poems and freelance articles. While some of her articles were selected for anthologies two historical pieces ended up in museums. Gail published her first book, NOW IS THE TIME, a Christian novel in 2004. That year the American Christian Writers Association named her a regional writer of the year.

ABOUT DESTIN:
The Beginning: Once dubbed the “World’s Luckiest Fishing Village” Destin dates back to seventh century A. D., when American Indians lived there. It’s named for Leonard Destin, who moved from New London, Connecticut, about 1845. For years he and his descendants fished and navigated the only channel passage to the Gulf of Mexico between Panama City and Pensacola, known as Destin’s East Pass.

The White Sand: Destin’s sand originated 20,000 years ago during the Ice Age, when temperatures warmed and ice caps started melting. Quartz particles from the Appalachian Mountains were swept into the water and carried by the Apalachicola River to the Gulf of Mexico, one-hundred twenty-five miles east of the area that became Destin. As the sea level rose, the quartz sands formed a new shoreline. The process continues today. 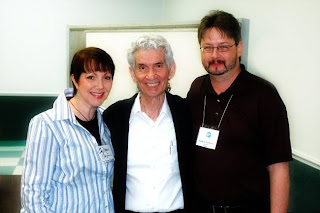 It was with much trepidation that I picked up the phone to call my friend, Larry Leech. Earlier that day I'd been at a Word Weavers meeting. I heard a couple of writers talking about their "novel group." It was then I remembered that Larry also has such a group, a place where writers in the throes of a novel can bring portions of their work for critique.

It takes a lot of nerve. Especially for me.

First of all, because I am published I fear putting other non-published writers ill at ease. Secondly, as a published writer, I am putting my work out there and saying, "See??? NEEDS WORK!" That's humbling. Not that I think I don't have work to do ... but my fear is that others will not feel as if they can honestly critique me.

Well, Larry didn't answer so I left a message. Later that afternoon he called back. As we were chatting -- exchanging pleasantries -- I wondered if I should just say, "Well, I called just to say hello."

But I didn't. I came clean. I told him I wanted to join his novel critique group, if there was room. He assured me there was.

He sent the email addresses of about the eight to ten writers in his group along with the general rules. I sent the first 2500 words of "Cedar Key" to them and then waited three days until the evening of the meeting.

I'd struggled with the opening of this book. Was it good enough? Compelling enough? Did it hook the reader? Did it raise the Major Dramatic Question that would be answered in the climax of the book?

Larry put me in the hot seat first. Of course. I listened as each one of the group's members gave me their honest opinions. One thing in particular had jumped out at each of them (so I immediately came home and took out the artistically offensive lines). For the most part, the group's members "got it." They loved it. They gave wonderful suggestions and pointers.

It's a very brave thing to do but I'm glad I did it. Next month I return with 2500 more words having been placed before them. Scary but I'm ready.

(Photo is of --right to left -- Larry Leech, Cecil Murphey, and myself. Photo taken by Loyd Boldman)
Posted by EVAMARIE at 4:52 PM No comments: