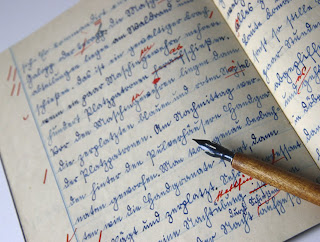 Can you believe I sat on my novel for nearly a month? According to the writing log I keep, the last time I wrote was September 5th.

In wondering why, I went back and re-read the entire 11,000 words I'd written up until this point. In doing so, I realized that the final scene penned had nearly done me in and I had needed time to recoup.

The final scene written is a courtroom scene. A courtroom scene in which the destiny of two children is decided. In my personal life, and in the course of a decade, I spent nearly five years in a courtroom, fighting for the right of one child, a child my husband and I now raise as our own. To write the courtroom scene in my novel, I pulled out a DVD I'd purchased of one of the old hearings. I watched it over and over, looking for tiny movements, listening for legal terms and the legally proper moments of the hearing. I was swept back into the angst, the fear, the relief. I relived every brutal moment.

Now, as the author of a fictitious work, I had to place my protag in the same skin I once wore. But in her case (pardon the pun), she lost.

But, you see, I know something Kimberly doesn't know. I am her creator ... the story's creator ... and I know I have to get her from Plot Point A to Plot Point B where she will be blessed beyond what she has even begun to imagine. To gain something she doesn't even realize she wants, she must be forced to loosen her control on something she thinks she cannot live without.

It took me a month to realize this. Writers often use the events of their lives as inspiration for scenes or stories. But we mix them up, change them around (lest we end up in court ourselves!). Still, we have to revisit old wounds and sometimes wonder what may have happened had things not turned out as they did.

And that takes the wind out of our sails. So, for a month, this writer -- with a reopened wound -- had to sit in a corner and lick it. Now, having a better understanding of God's grace and His plan, she can continue to write.

And so she shall. And so she has. Return to Cedar Key is now at 16k words.