It All Happened So Fast... 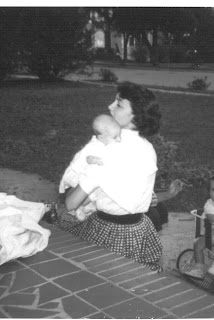 ...not just Mother's sudden illness and the passing on to Glory.
The last 53 years went by so fast.
Oh, if I'd only known! There would have never been a moment of disobedience from the five-year-old. I'd been a more gentle, appreciative teenager. I would have cherished every moment even more than I already did as an adult.
I would have written more letters. She loved letters.
Email had taken them away, really. She just wasn't that keen on the Internet.
We would have laughed more. She loved to laugh. And I would have recorded her telling stories as I'd done Daddy's mother. My mother also had some great stories to tell ... of growing up ... and of her mother and father and brothers and extended family. She grew up in a lot of love.
I never ended a conversation without "I love you" but I would have thrown it in to a few conversations as well. What would it have hurt?
If I had known ... on her last healthy day ... that it would be her last healthy day ... I would have never left her side. Or I would have taken her to the hospital right then and there. And told them what I somehow knew. And they would have made it all right again.
But it all happened so fast.
Posted by EVAMARIE at 11:06 PM 7 comments: 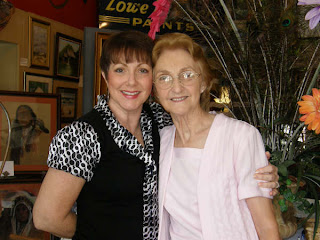 It's June 10, 2010. It's been two weeks and one day since the most difficult, easiest day of my life.
The day my mother passed on to Glory.
We were together near Black Mountain, NC when she had the first hemorrhage from a brain aneurysm. She had the second hemorrhage in the hospital.
Over the next couple of days, I'll tell you a little bit about all this. Then, we'll go back to talking about Israel.
But I'll tell you this: heaven is all the more lovely because of a little lady I know living there. I miss her more than words can say, but I know she is exactly where she has always wanted to be.
Thank you for your patience with my blog.
Eva Marie Everson
Posted by EVAMARIE at 8:48 AM 2 comments: