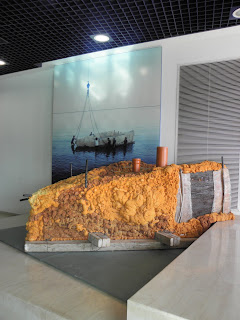 It would be a full day. A day that proved to myself as well as to the team that pilgrims too often "run where Jesus walked."
If I had the time -- if we'd had the time -- we could have easily spent three to four days in this area. Easily. And still not done everything I'd like to do. For one, we missed going up Arbel ... but that was due to a race in the area (and on our 2nd day, so let's not go there yet).
I was excited that morning. Truly. We were going to the Bet Yigal Alon Museum at Ginosar to see the remains of a 1st Century wooden boat which had been found in a most remarkable place back in 1986. According to tradition, the Primacy of Peter (also known as Mensa Christi, or Table of Christ) is where the resurrected Jesus cooked breakfast for the disciples who had returned to fishing (at Peter's encouragement). After being reinstated by Jesus, Peter (who is now known by a variety of titles, such as the First Pope and Prince of the Apostles) went on to preach the first sermon. In other words, he left the boat behind. The Primacy of Peter Church rests on the spot where tradition says that happened. But what happened to the boat?
Perhaps it is the boat discovered in 1986 by Moshe and Yuval Lufan, two brothers who were -- of all things -- fishermen! (Can you say "Peter and James," boys and girls?) The true miracle of the find was not just the discovery but the double rainbow that appeared in the sky over the Sea of Galilee. 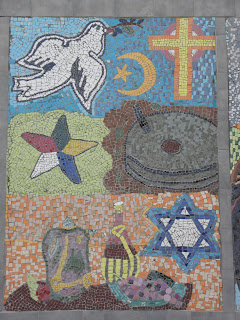 Excavation of the boat was no easy feat. Conservationists, archeologists, volunteers, and the Powers That Be worked side by side. They wrapped it in a polyurethane coat to avoid disintegration. It took twelve days and nights -- and then it was soaked in a chemical bath for seven years before it was placed on exhibition at the Bet Yigal Alon center at Ginnosar. Amazingly, the boat has tested to date back between 100 BC and 100 AD. Could this be the boat Peter left behind?
I was thrilled that we were going to the centerfor two reasons. 1) I wanted my teammates to see the boat. 2) I wanted my teammates to meet my dear DEAR friends who manage the gift shop. 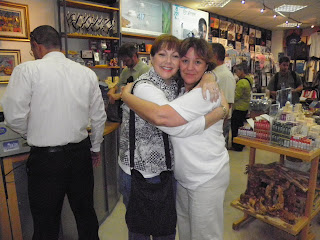 We were met by a young woman named Marina (who I'd met previously). She talked to our team about the center, then escorted them to a a wall of glass which opens upon sensing someone standing before it. The team was ahead of me. The door opened. I hear the ooh's and aah's. Just as I was about to follow, I turned toward the store and saw Tova, my friend. "Tova!" I said.
"EVA!" she said. Her arms spread wide in greeting. We hugged. She called out, "Naamah, it's Eva!" Naamah and her husband Ohad walked over. Lots of hugs were shared. I told them I'd be back shortly, then joined my team. 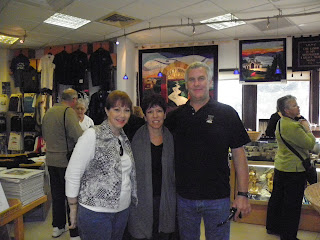 I couldn't wait to introduce everyone to my friends (minus Tova's husband, Alex, who had gone out on an errand). I left Tova and went behind the sliding glass doors to the place where the boat is housed. I took some photos. Talked to my friends in hushed tones. Then told everyone that my friends from the gift shop were looking forward to meeting them.
The next hour (at least!) was spent shopping. Robi outdid everyone! I was surprised to see the book Miriam and I had written on a shelf. "You have the book!" I declared to Tova. 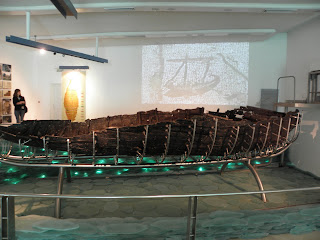 "Of course!" she said (a common Israeli saying ... in Hebrew "Betach!") Tova took the books off the shelves and had Miriam and me sign the copies. It was the first time she and I had ever done that together! What a thrill!! A lot of pictures were taken amongst much laughter. But then it was time to go ... With sadness and kisses, we said "shalom" and "goodbye."
But not forever. They know I'll be back as soon as I can. And, until then, I hold the good people at Bet Yigal Alon in my heart. Now and always. 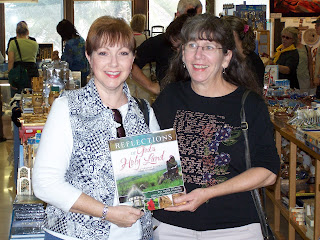 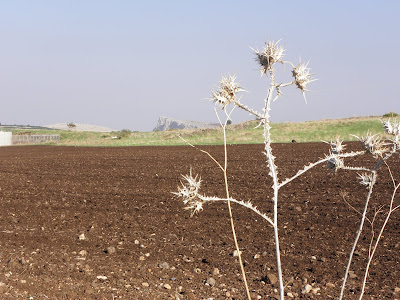 Encouraging all of my blog readers to shift gears and go to CBN.com to read about The Fifth Gospel
And yes, I wrote it ... :)
Shalom Aleichem!
Eva Marie Everson
Posted by EVAMARIE at 3:59 PM No comments: 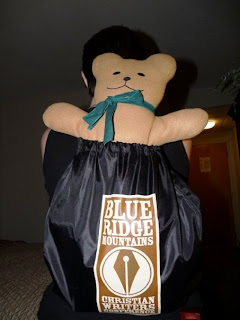 My traveling buddy is a stuffed pillow in the shape of a bear that I call "Mr. Bear." I bought Mr. Bear in Canada during a trip there to speak at a women's conference. There -- for the umpteenth time -- I lost my neck pillow. You know, those expensive pillows designed to wrap around you neck and to keep you from getting cramps when you sleep while traveling.
Anyway, another $12.99 down the drain.
I was traveling a lot during that period but just didn't want to buy another pillow. Still, it is a long way from Canada to Florida. My hostess and new friend Catherine Ryan said we'd go to the mall to see if we could find them for less. (I was also looking for a little souvenir or two for my baby girl.) Just after we walked into the mall, I saw a bin of bear-shaped pillows at a store akin to a Bed, Bath, and Beyond. They were $3.99 (US Dollars).
Mr. Bear was not chosen willy-nilly. I looked at quite a few of those bears before I picked the one worthy of the name (not to mention good enough to be my traveling buddy). When I took Mr. Bear in my arms, I looked at him, then tossed him. I can't explain it really. There was something in his eyes that followed mine. Something that said, "Now what did I ever do to you? Don't I deserve to be loved? Aren't I just the cutest thing you've ever seen?" 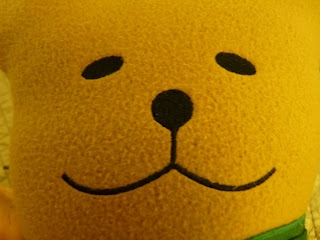 So, I bought Mr. Bear. (I couldn't lose him if I tried!) I have found that he fits perfectly between me and the window of a plane. He's worked wonders for my back when it starts to ache. And he's fun to cuddle with at night when I'm missing my real snuggly bear, Dennis (the huggy hubby).
So here's the thing. Mr. Bear has become a little famous. When I am traveling through the airport, he rides along in my carry-on, typically peeking out and waving at all the little children who exclaim, "Look, Mommy! It's a lady with a bear!"
But also he's become that little man who can be found resting on my hotel room pillows during the day. When others happen in (you know, those gals I work with -- no men in my hotel room!!!) they say, "Oh, who is this little guy?" Last year at the Blue Ridge Christian Writers Conference -- the one where I was assigned one room but had to sleep in another (long story) -- Mr. Bear was often seen trekking down the hallways and in the elevators until I reached my "sleeping room," which was actually the room of Ramona Richards (who took the photo of Mr. Bear in the BRCWC backpack!). (Another long story!)
At my website, Mr. Bear has his own section. Why wouldn't he? It's called Travels with Mr. Bear (I show my latest trips through photography.)
Of course, Mr. Bear accompanied me to Israel. He got up early one morning to see the Sea of Galilee, which he thought was quite pretty. 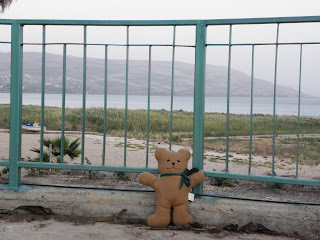 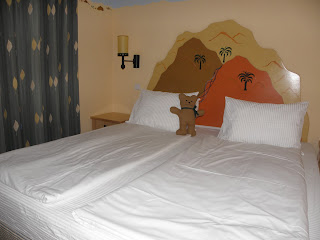 He thought the rooms at Ein Gedi Kibbutz were quite comfy. In fact, he and I enjoyed watching Israel's version of Dancing with the Stars together the night we were there.
There was one night that Mr. Bear managed to make me laugh, though. and it was a much needed laugh. It had been a physically grueling day. We'd climbed to the top of Herodian and then back down again to see the recently discovered tomb. After that we climbed right back up and then back down again to see "home sweet home" of Herodian. After an ice cream, which we all needed desperately by that point, we drove back to Jerusalem stopping long enough to see the the ruins of a church built around what is traditionally the rock where Mary rested before reaching Bethlehem. Then into Jerusalem to visit the Jerusalem Archeological Park (Southern Wall Excavations), the Davidson Center, the Kotel, or Western Wall, the Arab Market, the Jewish Quarter and Cardo and finally the heart-breaking Yad Vashem (the National Memorial and Museum of the Holocaust). When we left the building of Yad Vashem it was to discover that our driver was not there and would not be back for 20 minutes. But honestly, none of us were upset at the news. We needed the time to reflect and to collect our emotions.
Finally back at the hotel (where we had to get ready for a dinner out), we rode the elevator up to the sixth floor, fell out without saying a word, then walked to our rooms. My room was first in the hallway. I opened the door ... and the site before me caused me to burst into peels of laughter! Soon my comrades in distress were coming into my room (okay, this time there WERE men in my room ... but the door was open and we were ALL in there) to see what had me so hysterical. 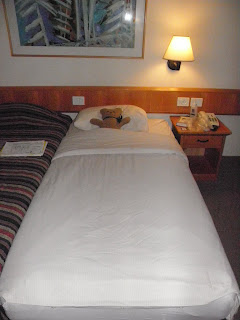 It was Mr. Bear, tucked in by housekeeping for the night.
The folks at Ramat Rachel Kibbutz had no idea that day as they carried about their duties and as I carried about mine that this one little act -- adorable as it was -- would be the balm I needed on my weary soul and body. It carried me to the next moments.
And that night, when I cried for all I had seen and heard that day, it was Mr. Bear who accepted those tears.
Goodnight, Mr. Bear.
Posted by EVAMARIE at 5:07 PM 5 comments: