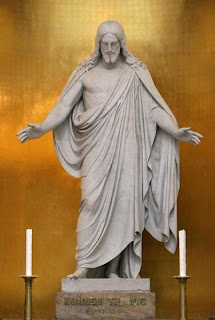 Thou Shalt Not Make Unto Thee any Graven Image
Notes from the book, God's Psychiatry, by Charles L. Allen: It is much easier to whittle God down to our size instead of repenting, changing our way of living, and being godly ourselves. When Horace Bushnell was a college student he felt he was an atheist. One day a voice seemed to say to him, "If you do not believe in God, what do you believe?"
He answered back, "I believe there is a difference between right and wrong."
"Are you living up to the highest you believe?" the voice seemed to ask.
"No," he said, "but I will."
That day he dedicated his life to his highest belief. Years later, after he had been pastor of one church 47 years, he said, "Better than I know any person in my church, I know Jesus Christ." when he began conforming his life to his beliefs, instead of making his beliefs fit his life, he was led to a realization of God.
Mother's Notes Found in the Margins: He had no beauty or majesty to attract us to Him. Nothing in His appearance that we should desire Him.
My Notes: God created man in His image, yet we are told not to create any image of God for the purpose of worship. So, we seek to find something within creation to connect with our Creator. We sit on the ocean's edge and marvel at it's power. We look out over a range of mountains and can barely speak. We gape in wonder at a forest of Sequoias. Why? Perhaps because in our effort to find God--to worship Him--we attempt to create Him in our image of what we think God is like.
We try to make God into what we want Him to be; not who He is. We know God wants us to live according to His goodness. Yet, when we want to sin, we create in our mind a God who is okay with that. We create a God who gives--health, wealth, prosperity--but we do not want a God who requires of us--thithes, offerings, acts of service.
We worship God by "picturing God" according to our own ideas and fabrications. but what if those notions aren't accurate? What if they aren't even close?
Philip said to Jesus, "Lord show us the Father."
Jesus replied, "He who has seen me, has seen the Father."
Those who walked with Jesus and went on to write about it failed to tell us anything about Jesus' physical appearance (almost as though they were commanded thusly). But they told us plenty about who He was.
How wonderful it must have been to look into the eyes of Jesus and know you are looking into the eyes of God! But we don't have that opportunity. We have no image, graven or otherwise.
Or do we?
It is us, you know...We are created in His image. When we look into our own eyes or the eyes of one another, we should catch a glimpse of His. We are to imitate Him, so much so, we become His reflection.
Lately I have found it difficult to worship because life has sucked everything out of me, leaving nothing but a shell and vacant eyes. My prayers of praise are spoken through tears and anguish. My example of Christianity has been anything but. When others look into my eyes, they hardly see God. They see hurt, betrayal, anger, anguish, confusion, brokenness. I fight to hold it all together for the sake of the call and if that is not apparent, then no one is really looking.
But maybe, what God really wants me to do is to stop pretending and start coming to Him from such a raw place, I am emptied of all of me and replaced with only Him.
John gave us the most incredible promise in the 22nd chapter of Revelation. He reminds all that those who are faithful "shall see His face" (vs 4).
No longer will we have to look to the mountains, the seas, the trees, or each other. One day, when there is nothing between us and God but the praise and worship, we shall see the glory of God by His own image.
Notes from the book: One thing more. After Thorwaldsen had completed his famous statue of Christ, he brought a friend to see it. Christ's arms were outstretched, His head bowed between them. The friend said, "But I cannot see His face."
The sculptor replied, "If you would see the face of Christ, you must get on your knees."
He is the perfect image of God; let us have no other.
Posted by EVAMARIE at 6:43 AM 1 comment: